The Saved queries pane automatically saves and stores all queries run in the query editor. Saved queries are sorted into two tabs:

Manage your saved queries from the list in either tab. 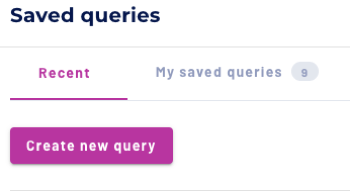 Search for queries by name from the lists on either tab. You can sort either list by the query name or by the date when the queries were last updated.

Queries are sorted to display the most recent or recently edited query at the top of the list. Reorder the query list on either tab using the query name or the time a query was last updated.

Queries that you have renamed are automatically saved in the My saved queries section.

In the query row, select Open to display the query in its existing editor tab. If there is no open editor tab for that query, a new one is created.

In the query row, select Preview to display the query. Once the Preview query dialog is open you have the following options:

You can share queries with any role. Any user with the roles specified for sharing can view, edit, and run the query. Only the creator of the query has the option to delete.