This topic teaches you the basic architecture of Trino, Starburst Enterprise, and Starburst Galaxy clusters. It assumes that you are familiar with the material in our concepts topic. After reading this topic, you should have a grasp of the main components of Starburst products.

A cluster sits between a user’s favorite SQL client, and the existing data sources that they want to query. Data sources are represented by catalogs, and those catalogs specify the data source connectivity that the cluster needs to query the data sources. With Starburst products, you can query any connected data source. 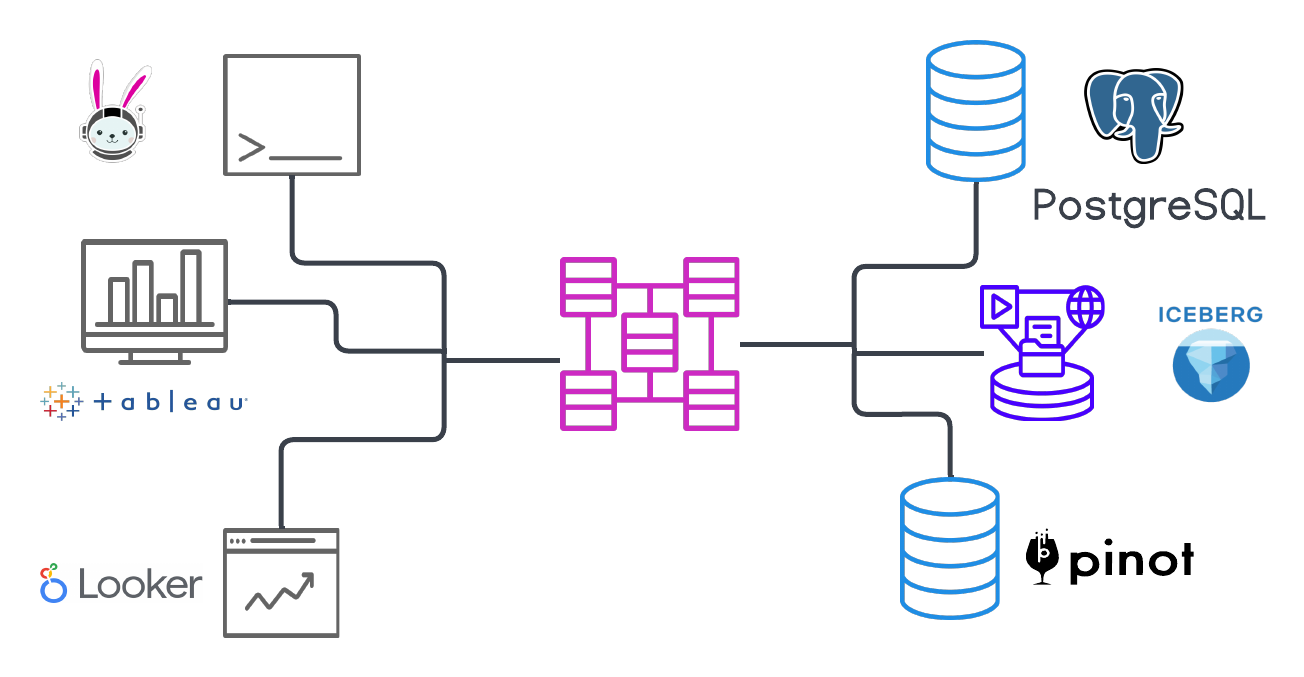 A single server process is run on each node in the cluster; only one node is designated as the coordinator. Worker nodes allow Starburst products to scale horizontally; more worker nodes means more processing resources. You can also scale up by increasing the size of the worker nodes, for example, to m5.8xlarge instances with 32 vCPUs and 128 GiB memory.

Rounding out Trino-based architecture is our suite of connectors. Connectors are what allow Starburst products to separate compute from storage. The configuration necessary to access a data source is called a catalog. Each catalog is configured with the connector for that particular data source. A connector is called when a catalog that is configured to use the connector is used in a query. Data source connections are established based on catalog configuration. The following example shows how this works with PostgreSQL, however, all RDBMS data sources are similarly configured: 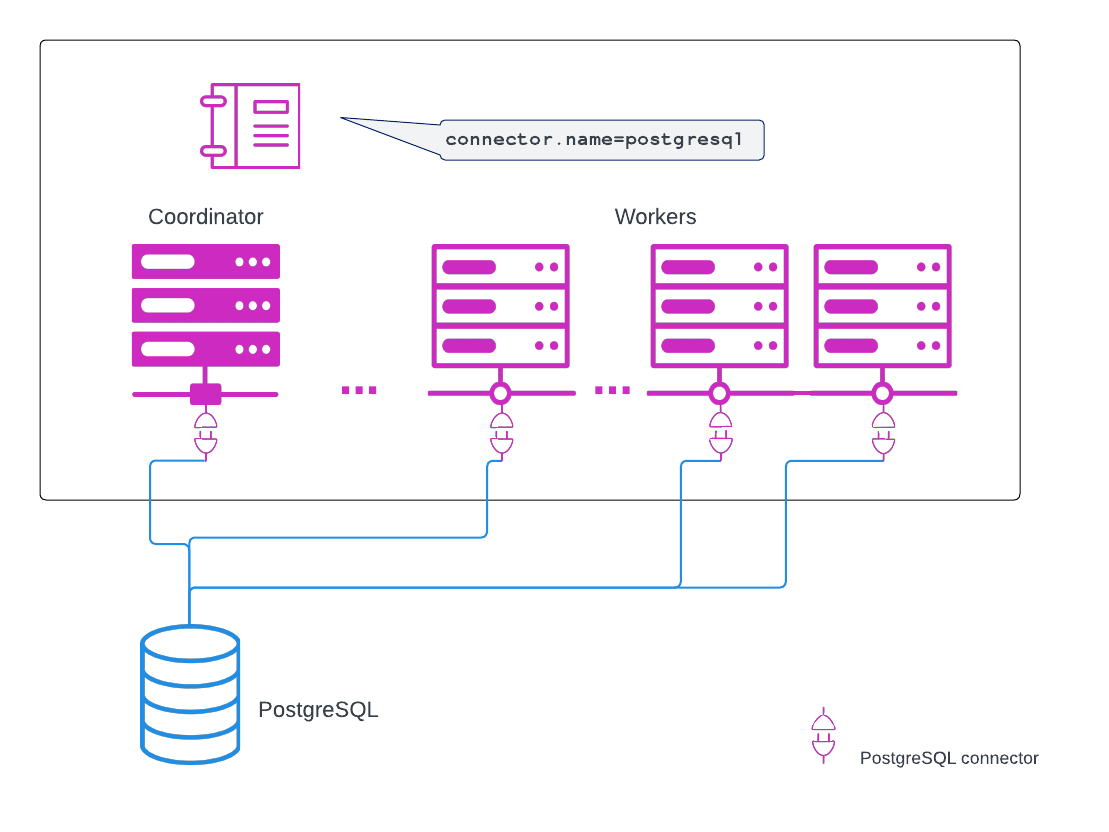 RDBMSs include not only the data, but also the metadata. Metadata is data, such as table definitions and datatypes, that describes tables, schemas, and other data objects. Object stores, however, do not include metadata; their metadata is stored separately, in an RDBMS. The coordinator and workers communicate directly with object storage metastores such as the Hive Metastore and AWS Glue through a catalog’s configured metastore URI: 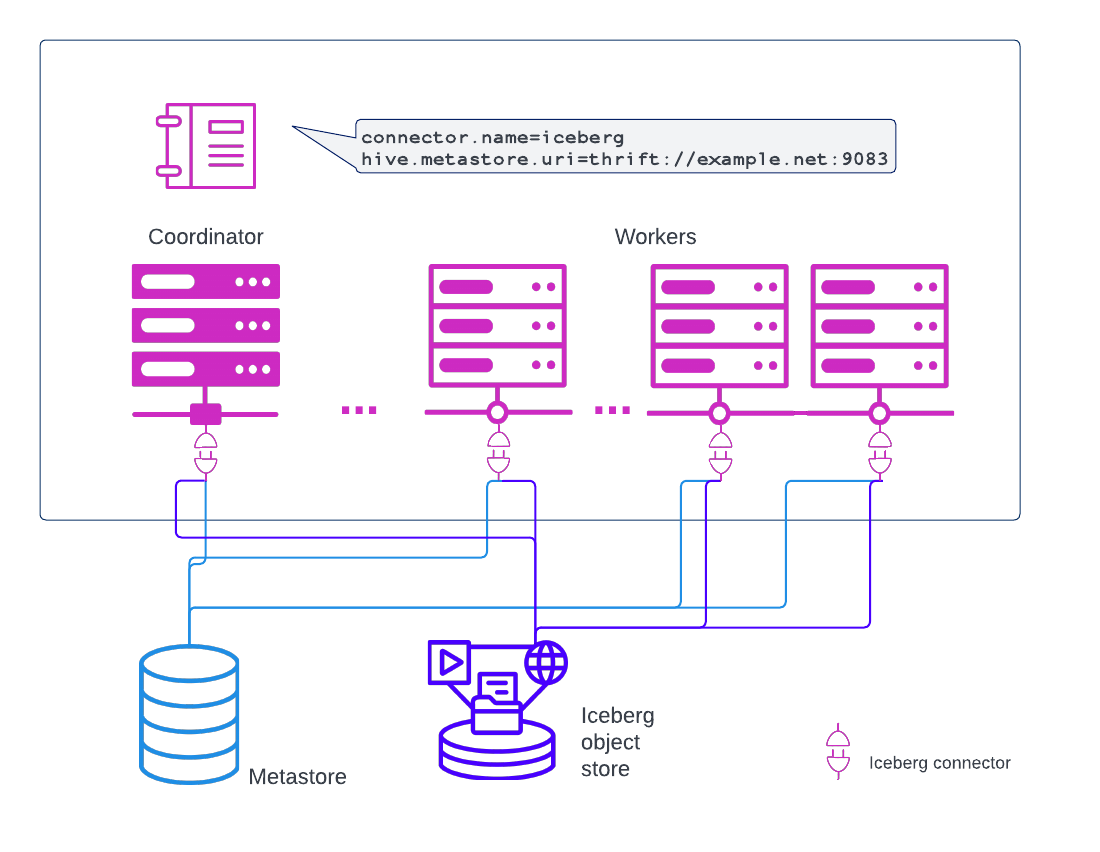 The preceding example shows how this works with an Iceberg data source. Hive and Delta Lake data sources are configured similarly.

There are only two types of nodes in a cluster: a coordinator, and worker nodes. Each node type is responsible for specific activities.

The coordinator node does several things for each query:

Keep in mind that these activities are per-query, and there can be multiple queries running concurrently that the coordinator must manage. The coordinator is sized differently than are workers. To really understand the coordinator and the resources it needs, let’s learn a bit about its key activities:

The coordinator receives a SQL statement as plain text. It has to first check the syntax to ensure that it is a valid, well-formed query. Next, it must ensure that the references to objects are valid. In performing these activities, it also determines whether the catalog has sufficient privileges to execute the statement.

The coordinator’s query planner and optimizer work together to create a query plan that details how to retrieve and process the data. Once the initial query plan is done, the cost-based optimizer (CBO) helps to create the distributed query plan. The query plan accounts for things like memory, CPU usage, number of workers, table statistics, network traffic, and best JOIN ordering. Depending on the data sources involved, it can also choose optimizations such as predicate pushdown and partial aggregations.

All of these tasks must be done for each concurrent query. It’s important to remember that while the pool of workers can be scaled, the coordinator is always a single node, and it must be sized to handle peak loads.

As you can see, adequate memory and CPUs are key to good performance. Starburst Galaxy makes this easy with cluster t-shirt sizing. SEP can be fine-tuned with separate coordinator and cluster sizing, along with many detailed memory and resource management configuration properties.

Worker nodes are responsible for executing tasks assigned to them by the coordinator’s scheduler, including retrieving and processing data from data sources. They communicate not only with the coordinator and data sources, but also with each other directly.

When a cluster executes a query against its cost-optimized query plan, multiple workers retrieve part of the result set at the same time, and then collaborate with each other to process the data until a single worker has the collated, processed data to pass on to the coordinator.

As with the coordinator, worker nodes must handle concurrent queries.

While the number of workers can be scaled, in-flight queries are limited to the resources they started with unless fault-tolerant execution is enabled. Both Starburst Enterprise and Starburst Galaxy provide autoscaling options.

Cluster sizing must be balanced with your scaling strategy to ensure that you can deliver results sets in an acceptable timeframe at peak load.

Secure communications are available for both Starburst Enterprise and Starburst Galaxy. It is important to have a basic understanding of how things work together in a secure manner, not only within the cluster, but also with clients, data sources, metastores and associated services such as third-party RBAC integrations outside of the cluster.

Data transfer between clients, the coordinator, and workers inside the cluster uses REST-based interactions over HTTP/HTTPS. There are three aspects to cluster communications:

Clients communicate only with the coordinator. Secure communication between clients and the cluster is available by configuring TLS. Access to elements of the the web UI is controlled through accounts in Starburst Galaxy, and through the built-in access controls in SEP:

Inside the cluster, workers communicate amongst themselves and with the coordinator. Secure internal communication between nodes is provided through use of a shared secret, TLS, or both in Starburst Enterprise. With Starburst Galaxy, this is taken care of for you.

Security between the cluster and data sources # 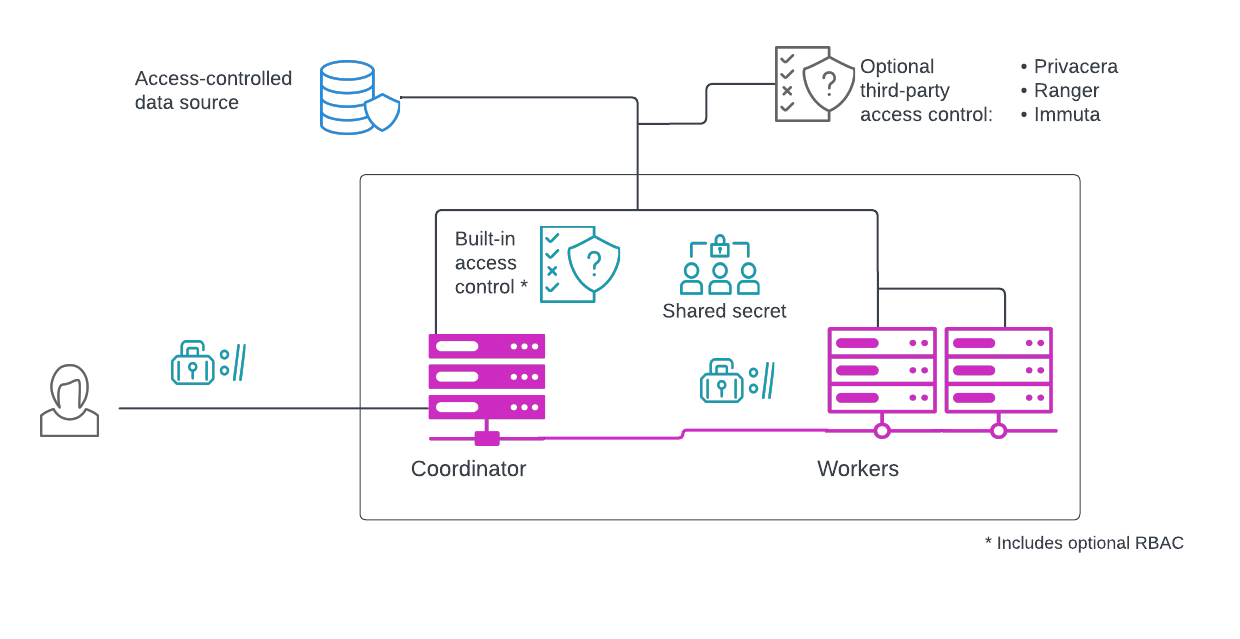